Think I need a bigger boat

In my earlier introduction to our travelling bus dogs, Jess and Pip, I mentioned about Jess’s love of kayaking.

I thought I would post some pictures of her latest kayak escapades and how it went down when we tried to introduce Pip to the family pastime. 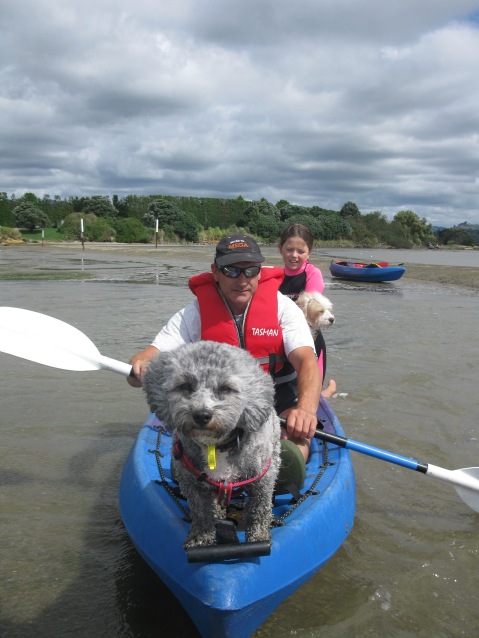 Jess does not really have what I’d call a love of water but she definitely has a love of being with her people and will not let much stop her being in her rightful place (generally by my side).

She puts up with getting a little wet in order to clamber aboard the kayak and will then place herself at which ever end is nearest the shore – standing like a mascot on a car bonnet. Unfortunately this also means that as the kayak turns and changes direction… so does the dog. She will turn and balance along the narrow edge of the kayak, duck under my arms and then get up on the bow/stern in her pointing position again. 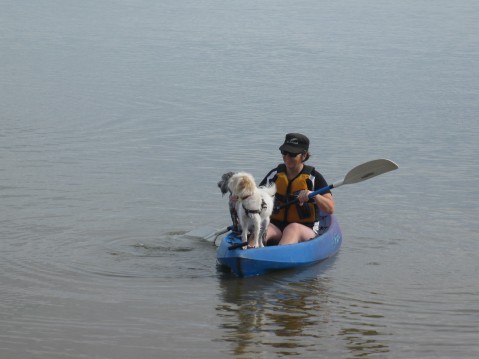 When we went away over Waitangi weekend we had some great opportunities to use the kayaks in nice shallow warm water so we thought it would be a great opportunity for Pip to discover our hobby.

As soon as Pip saw Jess having a go then she was eager to try it too.
She was pretty keen to follow Jess in her trips around the perimeter of the boat as well.
I was not so keen to have two such distracting factors disturbing my kayak from its normal unwobbly state.

We all had an enjoyable time “mucking about on the water” and the dogs had several chances to become experts on manoeuvering on a kayak.

Pip has significantly longer legs than Jess and when she has had enough she simply jumps off the kayak while still a distance from the shore. 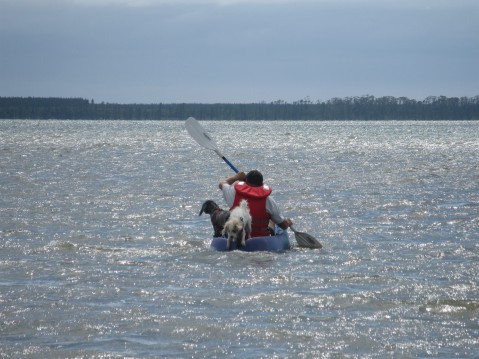 She strolled through the water and after a short spell chasing seagulls she settled down to kayaking… Pip style….