If you live in (or have at some point visited) New Zealand then you’ll definitely know it.

If you are in another part of the world (and don’t have a Lonely Planet guide to NZ that you scour every night) then you might not even have heard of it.

I thought I’d blog today about what I consider to be an extremely well-known New Zealand tourist destination: Sky Tower.

We first visited in April 2007 while we lived in the UK but were on our recce trip to NZ and toured North island in a motorhome (sound familiar?).

As bona-fide tourists a visit to Sky Tower was kind of compulsory and as it was made on our very last evening in New Zealand we splashed out and had dinner at The Observatory.

The restaurant is situated one floor above the main observation level (in other words… very high up) and as well as offering enthralling views, I can quite honestly say has fantastic service and food with the best buffet meal we’ve ever had – anywhere.

There are other eateries within Sky Tower including The Orbit – a revolving restaurant at the top of the tower.

(Handy hint – if you think you might be visiting one of Sky Tower’s restaurants, don’t make a separate journey up the tower then book your table later – you’ll have paid to go up twice whereas a lift ticket is automatically included when you make a table reservation).

It is taller than  the Eiffel Tower in Paris (It is actually the 12th tallest tower in the world) and has glass-fronted elevators to take visitors up to three observation levels which all offer a 360-degree view of  Auckland. 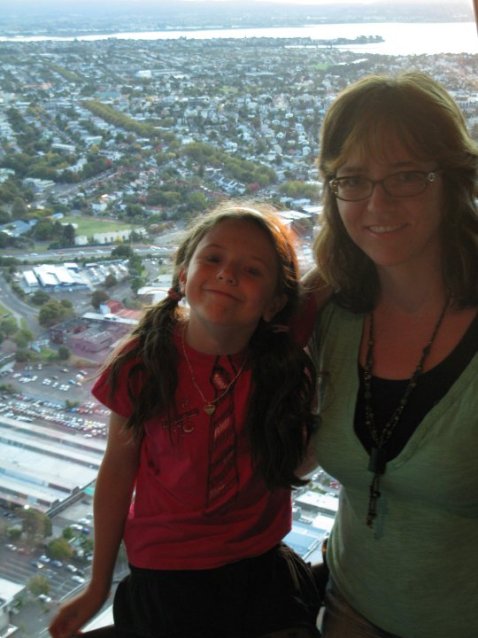 There are also several glass sections of floor to help turn your stomach a little more but if a sheer drop view doesn’t do it for you there’s more thrills available with an outside SkyWalk around the perimeter or you can try SkyJumping off the Tower! 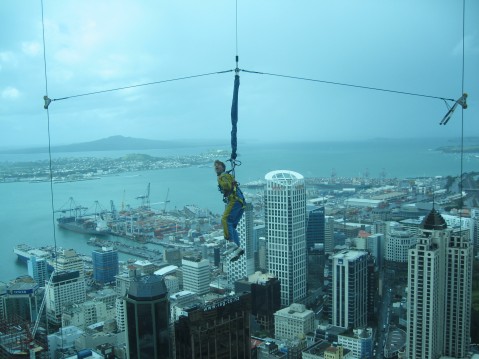 We made a return visit to Sky tower in April 2010.
It was actually our first ever holiday in the newly purchased, much devoted Kiwi Blog bus.
A friend volunteered his mother’s garden as a stop-over (cheers Andy!) and we had a great view parked in her St. Johns Road garden. 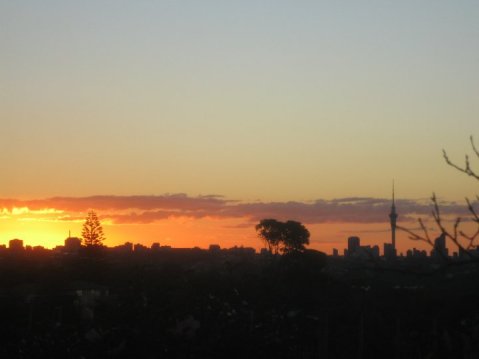 We had another great meal at the Observatory restaurant and got to enjoy the night-views of Auckland.

Our second visit to Sky Tower was made all the sweeter on our departure; we were not heading off to the airport to sadly depart New Zealand’s lovely shores – we were now heading back to the Kiwi Blog Bus for the beginning of more NZ adventures.